There are numerous types of moving vans on the market but they don’t have the same payload capacity. Here are some of the Lorries with the highest cargo ratings. 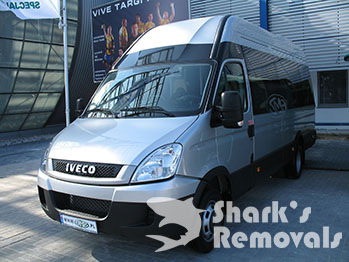 The Iveco Daily is a light commercial vehicles that has been in production since the late 1970s. The current version of the Lorrie is its sixth generation and it has been in production since 2014. The vehicle can with found with nine different types of engines (six Euro 5 engines and three Euro 6 engines). Since 2010, Iveco has also been producing an electric variation of the Daily. The vehicle can carry over four tonnes which explains why it is one of the favorite van of most man and van companies such as Shark’s Removals.

Mercedes-Benz produced the Vario from 1996 to 2013. It is classified as a full-size commercial heavy van and in some countries is being converted into a minibus which serves the public transport network or into utility vehicles such ambulances, postal vans or tour buses. It has a five-speed automatic gearbox and can be found with two different engines (OM602 and OM904). The maximum payload of the Vario is 3895 kilogrammes which means that it can easily haul 150 bags of cement.

Manufactured since 1980, Renault Master is the French van is the highest payload rating with a carrying capability of 2254 kilogrammes. The vehicle is identified as a light-commercial van and is the successor Renault Super Goélette which was produced by Saviem from 1965 to 1982. The current third generation of the van has a six-speed manual or automatic gearbox and is fitted with a 2.3 l4 engine.

The Ford Transit is perhaps the most famous and well-known van on the planet. It has been in production since the mid-1960s and is currently producing the fifth generation of the Transit. Since 1965, Ford was sold over eight million units which makes it the third best-selling Lorrie in the history of the automotive industry. The demand for the Transit is so immense that the van is being assembled in three different factories (Kocaeli in Turkey, Yelabuga in Russia and Claycomo in the US). The vehicle has a maximum payload of 2238 kilogrammes which makes it a Lorrie of choice by man and van contractors such as Shark’s Removals when it comes to mid-scale domestic or commercial removals.

The Fiat Ducato is a light commercial vehicle that has been in production since the early-1980s. To date over 2.6 million units of the Lorrie have been produced which makes it one of the most successful European vans of all time. The third generation of the Ducato is being manufactured in a three or four door variation and is also being produced as a two door pickup vehicle. It has a cargo capacity of 1995 kilogrammes and in 2014 was the subject of facelift which modernised its appearance.

Other vans with huge payload capacities: